The Federal German Government presented a draft for the first Climate Action Law of Germany in October 2019. The law is one element in a package of climate legislation and policy programs to ensure Germany reaches their climate targets of 2030. The law includes different measures for climate protection like a phase-out of energy production from coal and the deployment of renewable energy production.

The Ministry for Economic Affairs and Energy presented the winners of the competition for large scale R&D projects within the 7th Energy Research Programme. With these projects, future-oriented energy technologies are being tested under real conditions and on an industrial scale. The central topic in the competition is the production, distribution and usage of low-carbon hydrogen among different sectors. A total of 20 projects have been selected of which 11 projects have a directly related to hydrogen production or usage. In total, a PtX capacity of around 330 MW is addressed with these 11 projects.

The Federal Ministry of Transport and Digital Infrastructure has selected 9 regions for the first (HyStarter) of three phases of the HyLand projects within the National Innovation Programme Hydrogen and Fuel Cells (NIP). These regions are Kiel, Rügen-Stralsund, Schaumburg, Lausitz, Weimar, Marburg, Neustadt an der Waldnaab, Reutlingen and Allgäu. Each of the regions or municipalities is advised on the organization and on the conception of the project for about one year. This includes forming a stakeholder landscape (e.g., political representations, municipal enterprises, industry, commerce, society), and jointly developing initial concept ideas on hydrogen and fuel cells, based on renewable energies in transport, but also in the areas of heat, electricity and storage.

The project ELEKTRA started in August funded by the NIP. The energy supply on the tugboat will be solely by gaseous hydrogen, fuel cells and batteries. Construction is scheduled to begin in October 2019, with completion by the shipyard scheduled for the fourth quarter of 2020. The ELEKTRA is to be used primarily in the transport of goods on the Berlin-Hamburg route and inner-city transport routes in Berlin.

The NIP is funding market deployment of fuel cell technologies in the transportation sector. This includes passenger cars, busses, trains and other mobile applications with fuel cell technologies. By October, 152 fuel cell vehicles had been registered in 2019 which sums up to 530 FCEVs in Germany. For those FCEVs, 76 hydrogen refuelling stations are available.

In the first half of 2019, more than 1,100 fuel cell heating systems for domestic buildings up to 5 kW have be granted for public funding. In total, 6,600 fuel cell systems for heating are in place in Germany.

The second phase of the National Innovation Programme for Fuel Cell and Hydrogen Technology, in place since 2016, relies on two funding mechanisms. One mechanism addresses R&D projects, directly linked to FCH topics. Several projects were approved with most providing support for market uptake by decreasing costs and increasing product lifetime. Single components as well as complete systems and production chains are considered within the approved projects. A brief overview of all projects of 2018 is given in the annual report of the NOW GmbH.

The other funding mechanism within the NIP is to support investment deploying FCH technologies. For example, the purchase of about 150 cars received funding support as mentioned above. Many of the fuelling stations now in operation were funded by the NIP that also includes, in some cases, support for the production of hydrogen by water electrolysis.

With approval of the Renewable Energy Directive at the European Level, discussions are now underway on its integration into the national framework. It will be important to generate incentives for integration of advanced fuels into the fuel mix including hydrogen as an advanced fuel in upstream processing. This might lead to large-scale deployments of water electrolysis systems in refineries. 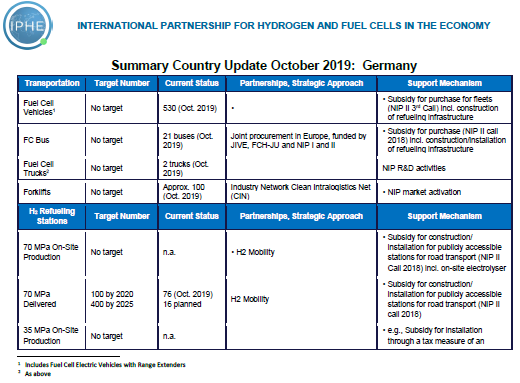