The President signed into law the Carbon Tax Act No 15 of 2019, which came into effect on 1 June 2019. As part of its contribution to the global effort on climate change, South Africa is introducing the Carbon Tax Act. Companies will pay a penalty of R120 per ton CO2-eq. It is hoped that the amount will be increased over time and that the funds will be used to support green initiatives towards decarbonising the economy.

No major developments during the period.

A South African delegation travelled to Germany and Spain for a tour of solar power and solar fuels research facilities. The tour will inform the development of Solar Research Infrastructure roadmap which includes facilities for the production of green hydrogen from renewable energy sources such as solar PV.

As part of celebrating the National Transport Month in October, the City of Johannesburg, in partnership with GIZ hosted a Symposium on how it plans to reduce fossil fuel emissions as it makes a transition towards low carbon transport. 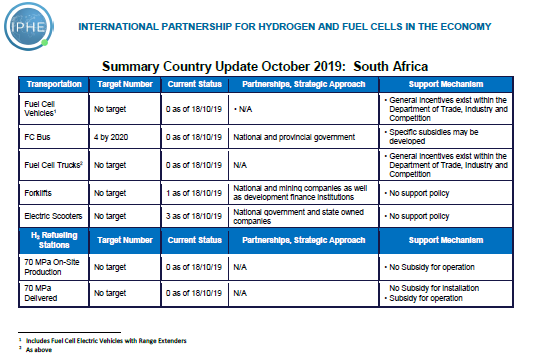